Here are some of our recent concerts and events.

This was a lunchtime concert at the Stapleford Granary just South of Cambridge. Another great venue, fantastic acoustics, and great audience! All three inspired us – as did the thought that the previous guitarists to perform there were Gary Ryan, John Etheridge and John Williams …

Stapleford Granary was a perfect complement to the concert at Clare Hall just two weeks earlier.

We were invited to play as part of Clare Hall’s Divertimenti series. Great location, great audience!

We played a full programme, and as encore we had the Elephant from Camille Saint-Saëns’s Carnival of the Animals. Here is a recording as a reminder – or as an indication of what you missed:

We played at St. Mary’s Church, Old Great North Road, Eaton Socon, St Neots, PE19 8EJ, in support of their piano fund.  It is a lovely church, and with the small but knowledgeable audience we enjoyed playing there. 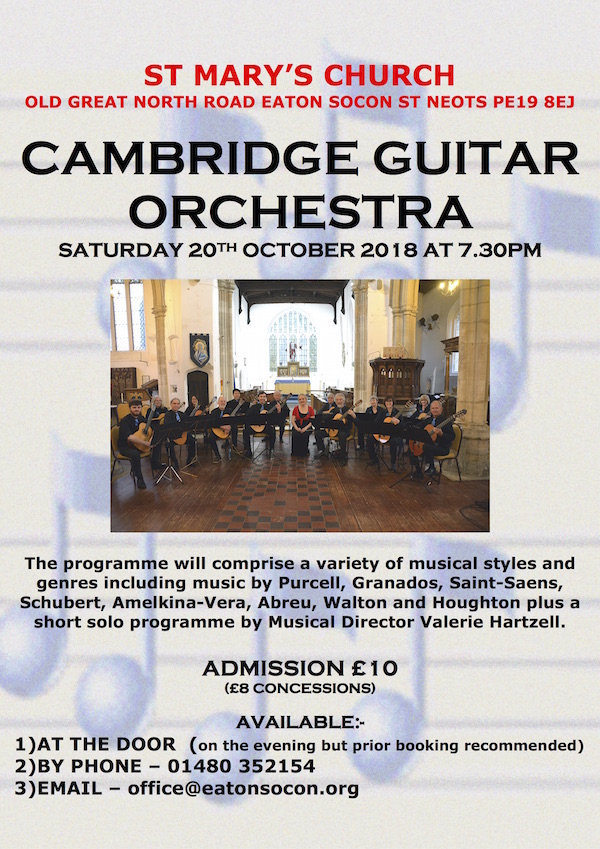 CGO hosted this year’s annual meeting of the Federation of Guitar Societies.  It was a pile of work preparing the event and organising the 60 plus participants on on the day, from welcoming them on arrival, through getting them ‘fed and watered’, making sure they played more or less in time, to washing up and tidying up afterwards.  So special thanks to Allix, Claire, Greg, Julia, Sue, Tony and Valérie.

Here is a taster of the massed guitar orchestra of all participants  (for more, see the CGO’s YouTube channel, or visit the Federation’s website):

Great concert in support of St. Mary’s the Virgin Church!  A big “Thank you” to the organisers, the enormous audience, and everyone involved in the catering. 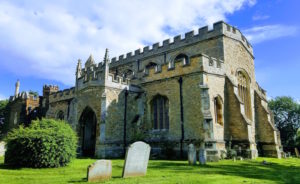 We played a range of music written for, or arranged for, classical guitar esemble, including music by Amelkina-Vera, Dumigan, Houghton, Saint-Saëns, Schubert and Walton. In addition, Valérie Hartzell, our Musical Director, and Mat James, one of our professional members, played some solos.

Concert at Saffron Walden’s Baptist Church. We  played the first part of the concert with Corona Brass playing the second half.