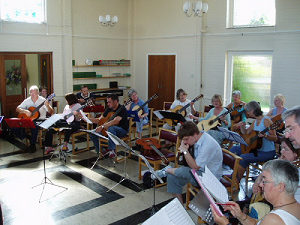 The Cambridge Guitar Orchestra was originally established in 1991 by Lorraine Eastwood and the late Chris Kilvington. The Orchestra disbanded in 1996 but was reformed in the same year by its members who subsequently appointed Peter Rueffer as musical director. Peter Rueffer was Musical Director for 20 years, until he handed over to Valérie Hartzell in 2017. 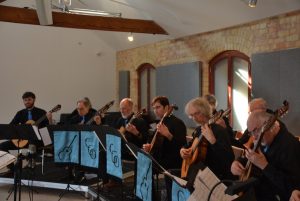 We perform regularly in and around Cambridge and have given concerts at the Brighton Festival and at venues as far afield as Portsmouth and Batley, N.Yorks.   In 2010, we visited Guitar’Essonne, a guitar orchestra based just outside Paris and then in 2012 we spent a weekend with Alegria, based just south of Brussels.  2013 saw Guitar’Essonne and Alegria visit us for the Cambridge International Guitar Weekend.

The Orchestra has been a prizewinner at the biennial National Guitar Guitar Orchestra Competition on three successive occasions gaining second place in 1998 and 2002 and first place in 2000. The CGO’s first CD was released in 2001, a second in 2005, followed by a third CD in 2010.

We rehearse on average once every two or three weeks during each term and aim to give a concert once every term.

CGO is run by committee and the objectives of the Orchestra are:

Our repertoire is wide ranging and includes arrangements of music from the Renaissance and Baroque, as well pieces written for guitar orchestra by contemporary composers.  The picture below shows us with Chris Dumigan and Mark Houghton, who have both written pieces that we play.