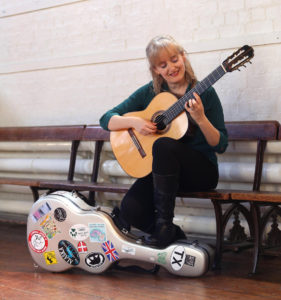 Valérie Hartzell has been CGO’s Musical Director since January 2017.

As performer and teacher, Valérie has a wide experience of solo, duet and ensemble work. She founded the International ‘Classical Minds‘ festival in Houston, Texas, in 2006 and continues to play a leading role as Artistic Director

The photo gives you a hint of Valérie’s international experience. She started playing the guitar in France (aged 3!), for much of her career she was based in North America, and she came to UK just a few years ago. In her career, she has performed widely across North America and Continental Europe, as well as UK. (For full details, visit her web site: http://www.valeriehartzell.co.uk/ )

We are excited that Valérie is working with us, and look forward to a great next stage in the CGO’s development.  She has taken over from Peter Rueffer, who was our Musical Director for 20 years. During that time, the CGO has been a prize-winner at the National Guitar Orchestra Competition on several occasions, performed in Paris and in Brussels, and organised an international guitar orchestra weekend in Cambridge.